Many businesses are struggling. Millions of Americans are out of work. But the IPO market is the hottest it’s been in years—and 2020 could be its biggest year ever.

With three months left on the calendar, U.S.-listed initial public offerings have raised nearly $95 billion through Wednesday, according to data provider Dealogic. That already surpasses the totals of every year except 2014 since the tech bubble in 2000. It’s nipping at the heels of 2014, when IPOs raised $96 billion, more than a quarter of it by

Bankers, lawyers and executives say that if the frenetic pace keeps up, 2020 will eclipse the tech-boom years of 1999 and 2000, when investors feverishly pumped money into burgeoning internet stocks before they crashed to Earth.

Investors are gobbling up these new listings, with this year’s IPOs posting the biggest gains during their trading debuts since 2000, at 22% through Wednesday. On average, 2020 IPOs have risen roughly 24% from their original prices.

The fortunes of the IPO market have never been more divergent with the state of the U.S. economy. The coronavirus pandemic sent businesses into free fall, pushing unemployment to its highest level ever this spring. But it also caused a shift in the economy. With everyone relying more on technology for work, school and everyday communications, the value of companies providing related services pushed higher. And with low interest rates limiting returns on traditionally safe investments like bonds, investors are looking for ways to make money wherever they can.

This year, more than 80% of the money raised by initial public offerings falls into three buckets: healthcare, technology and newly popular blank-check companies—shell firms whose only purpose is to acquire a private target and take it public. That is the most concentrated the IPO market has been since 2007, according to Dealogic, when new listings of banks and lending institutions flooded the market before the financial crisis.

More than 235 companies have joined the U.S. public markets this year, on track for the most since 439 companies went public in 2000, according to Dealogic. They’ll soon be joined by giants Airbnb Inc. and Palantir Technologies Inc., which will go public later this year after long tours as private companies.

, America’s most well-known value investor, who typically avoids investing in startups, is participating.

bought roughly $735 million in shares of data-warehousing company Snowflake Inc.’s public offering. Shares finished their first day of trading on Sept. 16 at more than $250 apiece, more than double their IPO price—making it the biggest tech IPO of the year. At the end of that first day, the company had a market value of $70.4 billion. Berkshire’s stake was worth nearly $1.6 billion.

The state of the IPO market is a huge reversal from just a few years ago, when many venture capitalists and CEOs had declared the initial public offering all but dead. For more than a decade, companies opted to raise giant amounts in the private markets, made possible thanks to large funds such as

$100 billion Vision Fund. Staying private allowed startups to avoid the hassle of regulatory disclosures and prevented them from having to answer to public shareholders. In 2016, IPOs and their investors raised less than $25 billion.

Now companies are growing wary of staying private too long after watching some marquee IPOs, like

struggle last year. Public investors are also rewarding high-growth companies with big valuations they are unlikely to fetch in the private markets—a change from a few years ago. Companies are now trying to hit a sweet spot, going public after they’ve had a chance to mature a bit but before their strong growth trajectory has slowed. 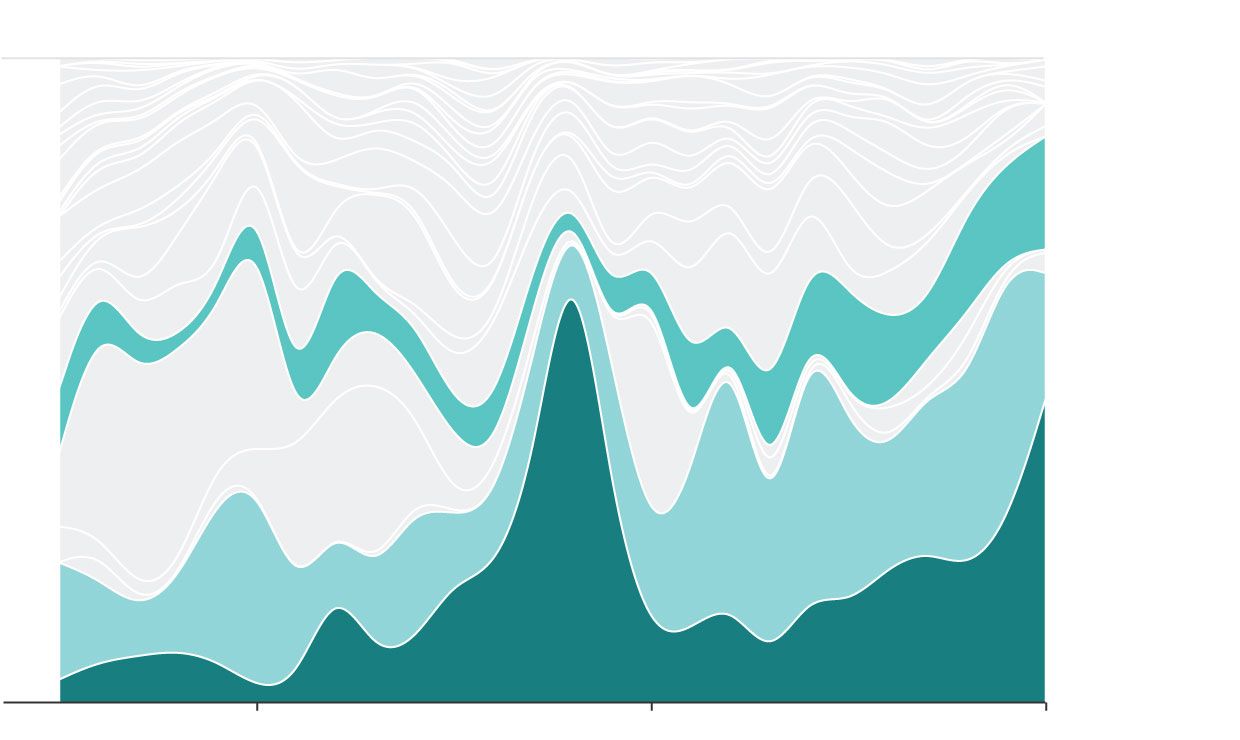 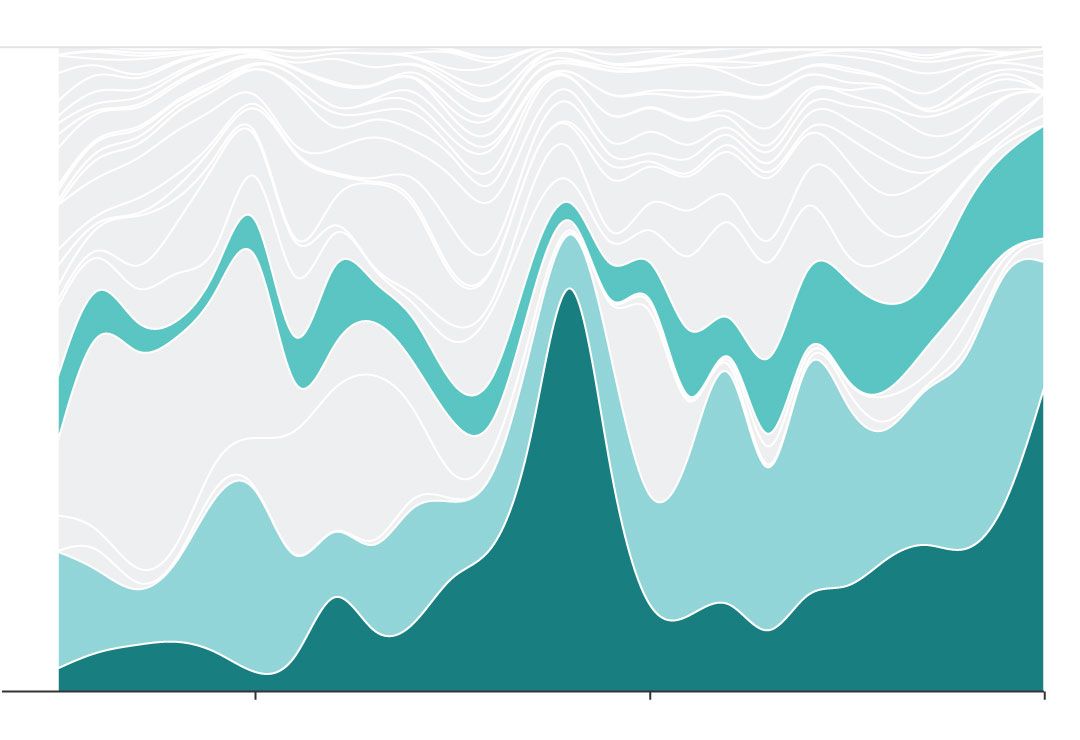 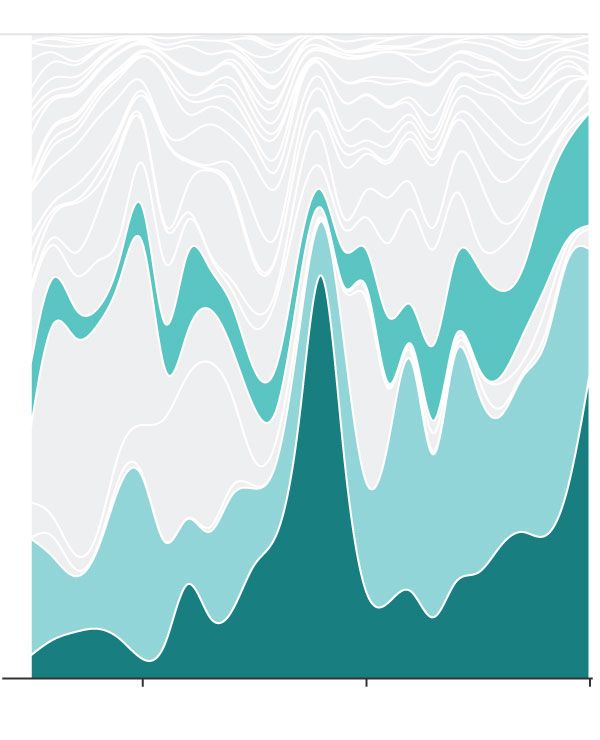 The market is less ecstatic than the feverish tech bubble that infused massive amounts of capital into internet companies like Pets.com, which then burned through cash and collapsed just months later, devastating the stock market. Still, companies that had previously written off a 2020 IPO are forging ahead this year, hoping to ride the wave. Others are planning public debuts in the first half of 2021.

The process of going public is changing as well, after remaining mostly the same since the 1980s.

“It used to be a formulaic conversation about the path to going public,” said Bennett Schachter, who heads global alternative capital solutions at

Those stages tended to be a series of fundraising rounds, perhaps a private placement to pre-selected investors, a so-called crossover financing round that involves investors that mostly work with public companies, followed by an IPO. “Now there is this broader and increasingly well-accepted spectrum of alternatives.”

Blank-check companies have exploded this year as an alternative to the traditional IPO, accounting for more than 40% of the money raised in IPOs this year. That compares to an average of 9% over the previous 10 years, according to Dealogic.

, co-founder of Eventbrite Inc., was an early investor in Airbnb, Uber and

This year he decided to launch a blank-check company. 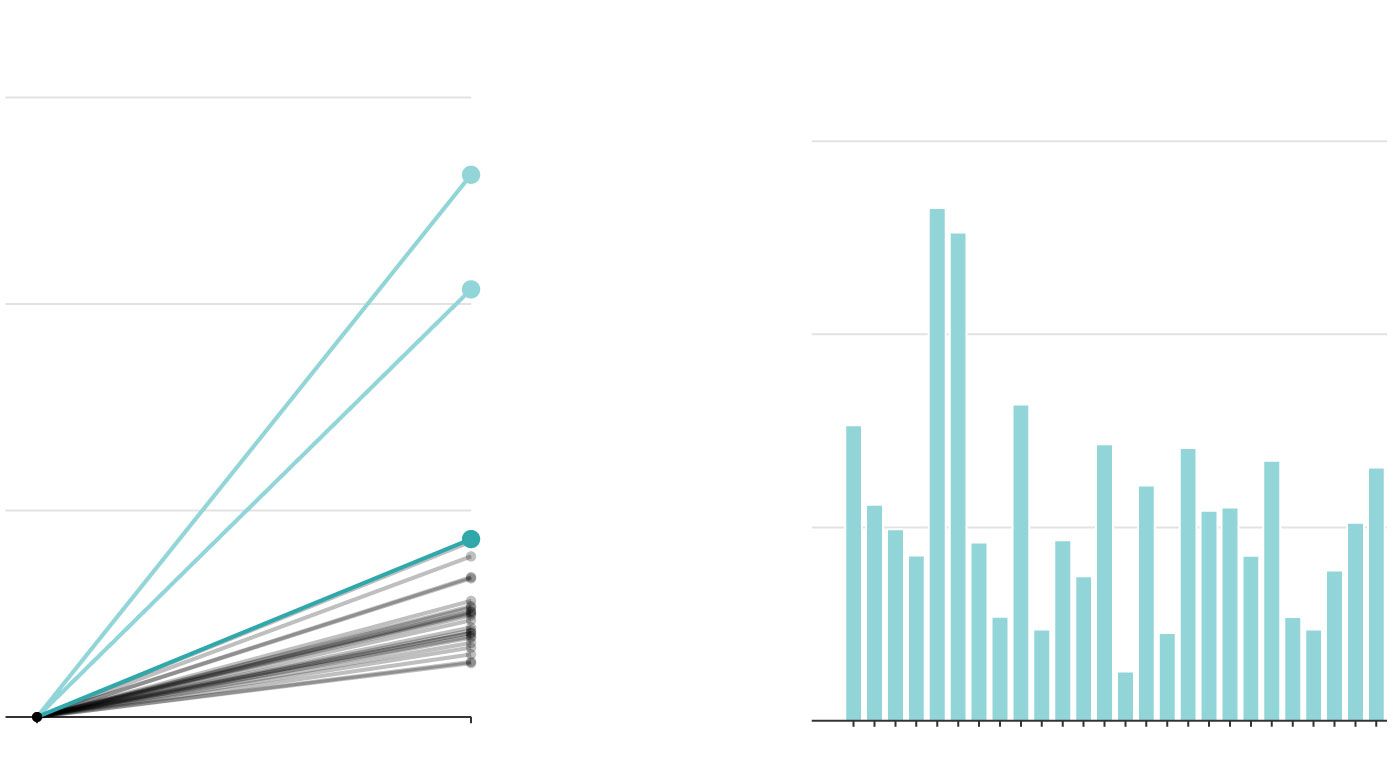 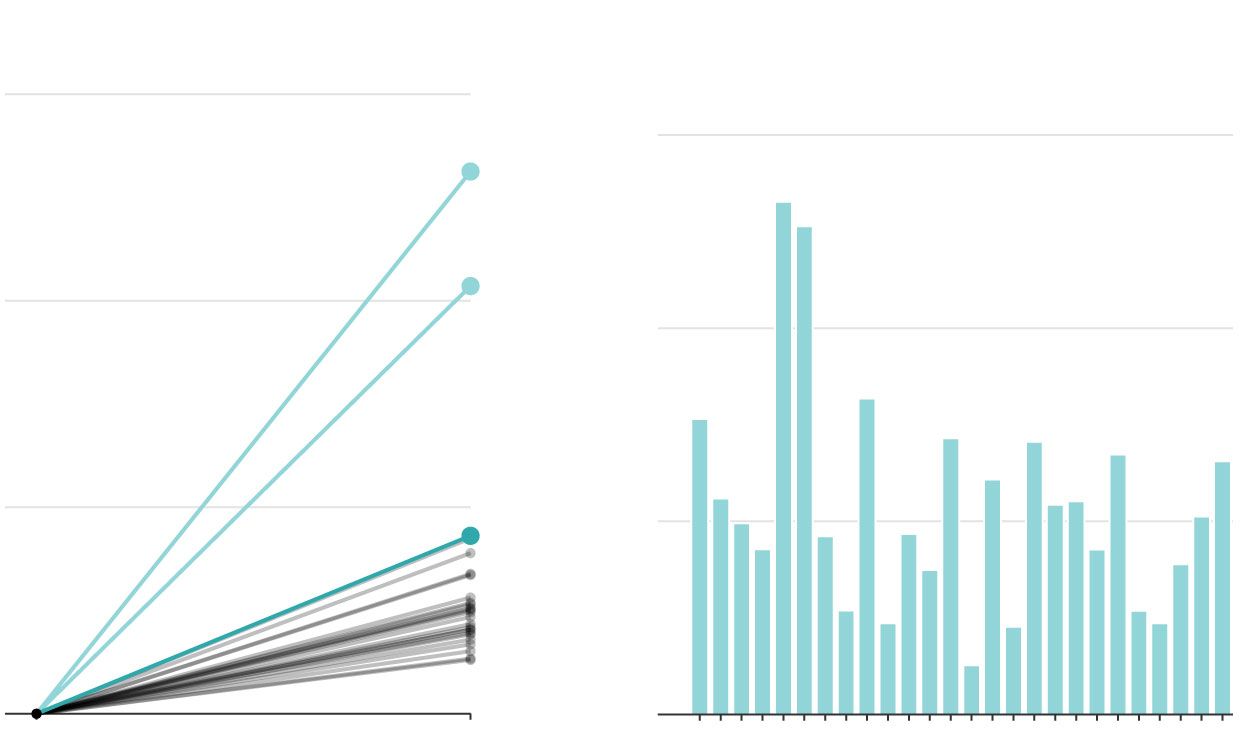 His first official meeting with bankers about his venture was in mid-June, he said. Less than two weeks later, he said, he filed confidentially with the Securities and Exchange Commission and by the end of July his filing was public. Roughly 60 days after that June meeting with bankers, Mr. Hartz’s blank-check company had raised $200 million and almost immediately started reaching out to founders of companies with whom he may want to merge. He said he was amazed how quickly he was able to turn his idea for a blank-check company—also known as a special-purpose acquisition company, or SPAC—into reality.

“SPACs have the possibility to be the leader in the future,” he said, noting one of their biggest benefits for founders is that in a reverse merger, a startup can provide shareholders with earnings and growth projections for the future. In a traditional IPO that isn’t allowed.

Another alternative more companies are exploring is going public through direct listings—in which they list employees’ and investors’ existing shares on the open market, allowing them to potentially cash out their stakes. That lets companies avoid investment banks’ big fees for underwriting an IPO, but doesn’t allow them to raise additional money.

which went public in 2018, spent much of its first two years public trading below its first-day closing price, though its shares have soared since this spring.

which went public in 2019, remains below its first-day closing level.

The other blockbuster name set to go public this year, Airbnb, had also planned a direct listing for its 2020 IPO. It had to change plans when the pandemic forced executives to raise additional money, according to people familiar with the matter. A spokesman for Airbnb declined to comment.

The rules could soon change. In late August, regulators approved a proposal from the New York Stock Exchange to let companies raise capital through direct listings, though the approval recently hit a snag due to objections from a large investor group. The option would remove a key barrier for companies, making direct listings even more attractive, according to people familiar with the matter.

has filed a similar proposal.

, the president of the New York Stock Exchange. “There is a renaissance in the IPO market.”

Social-distancing measures to avoid the virus have also shaken up the process. The typical IPO roadshow spanned a grueling eight to 10 days when executives traveled the globe and peddled their wares to prospective investors in conference rooms. Now, roadshows are typically shorter and entirely virtual, enabling more investors to participate than ever before.

When online insurance broker SelectQuote Inc. listed its shares on the NYSE in May, it used a four-day virtual roadshow. “Who would’ve thought you could raise $350 million in your pajamas from the comfort of your home?” the company’s CEO,

Pandemic-induced shifts in the public and private markets helped usher in the IPOs. As the country shut down earlier this year, the availability of private funding became more scarce. Some executives struggled to raise money at the valuations they wanted. In the second quarter, there was a sharp rise in the number of startups in the private market completing so-called down rounds, or funding rounds where the valuation based on the share price dropped compared with the prior round.

The public funding markets, including the IPO market, also seized up briefly in early March, but swift moves by central banks around the world restarted the flow of money. After the S&P 500 hit its 2020 low in late March, a bond-buying intervention from the Federal Reserve helped companies raise cash—and enthusiastic bets from individual investors helped drive up shares of big tech companies and propel major indexes higher. Bankers and corporate executives took advantage of the optimism, rushing out companies that had been aiming for early spring IPOs.

To ensure these IPOs went smoothly, companies and their bankers lined up institutional investors, including

and Fidelity Investments, to commit to buying large portions of the company either ahead of the IPO or as part of the public offering. Fund managers told The Wall Street Journal that after a choppy spring that hammered some of their portfolios, they were happy to be able to buy into IPOs, which tend to outperform the broader stock market.

Is there a recent IPO you were surprised by? Join the conversation below.

Shares of companies that went public in late May and early June soared, leading a bevy of new issuances this summer. The New York Stock Exchange said August, typically a sleepy time for IPOs, was its busiest IPO month since October 2013.

This spring also brought a surge in financing for blank-check companies—a sign that there’s more demand for IPOs this year than there are companies able to quickly go public.

While the niche has been around for many years, it often wasn’t taken seriously. Their legitimacy was bolstered over the past year after high-profile companies like

Their structure tends to offer a big payday to the blank-check company’s sponsors even if shares fall. Typically, those sponsors are awarded shares equivalent to about 20% to 25% of what is raised in the IPO at the time the target is bought. Some newer blank-check offerings are reducing their cut of the deal. Blank-check IPOs also haven’t always performed well; historically, many traded below their offer prices, and deals they strike aren’t always approved by shareholders. The newest generation of blank-check sponsors say they want to change that.

The case of electric-truck startup

shows how risks remain. One of this year’s high-profile IPOs through a blank-check company, it is now embroiled in legal and stock-trading woes, with the Justice Department examining allegations that it made exaggerated claims about its technology. A spokeswoman for Nikola declined to comment. Shares have tumbled, but remain above the level they traded when their merger deal was announced.

Vivek Ranadivé is no stranger to capitalizing on an IPO boom. In 1999, the tech entrepreneur brought his company, Tibco Software Inc., public and watched shares double during their first day of trading. Since then, the software entrepreneur sold Tibco to a private-equity firm in 2014, stayed involved in the world of tech investing and became majority owner of the Sacramento Kings.

In February, Mr. Ranadivé attended the NBA All-Star Game and ran into some investors who told him he should try his hand at a blank-check company. At first, he was skeptical.

“A SPAC was a sleazy thing 20 years ago,” he said. Then the pandemic hit with full force, and the timing seemed perfect to launch a SPAC of his own. So he did.

This summer, Mr. Ranadivé raised more than $480 million for his new blank-check company. Now he is on the hunt for a target to buy.